Update: The International 2018 is upon us, read all about it here!

Every year since the game entered its public beta in 2011, Valve has hosted an official Dota-only tournament known as The International.  And every year, the prizepool goes up, setting new records for e-sports as a whole.  No other game has a tournament like it, and perhaps most impressive of all is that a large chunk of these huge prize-pools is crowd-funded.  These funds are raised by selling an in-game item called the Compendium:  initially a tournament scrapbook with information and predictions, now a feature-filled tome of quests, prizes and minigames to get everyone hyped up for the biggest e-sports event of the year.

Competing in The International is not just about the absurd prizepool, but also about the prestige.  Taking home the trophy is everything, as doing so means being immortalized in e-sports history.  The competition is so high that nothing less than a complete dedication to the game will be enough to earn a ticket to the event. Many of these players have lived and breathed Dota for most of their lives, passing up school and university in order to take a gamble on an e-sports career.

For a candid look into some of the lives of these players, be sure to watch Free to Play, a Valve documentary that follows some well-known players as they prepare for the very first International.

Since 2015, The Majors have been an attempt by Valve to further improve the competitive scene of Dota 2.  Previously, the only “official” tournament was The International itself, which meant absolutely obscene prize-pools were concentrated into a single event each year.  With the Majors, there are now 3 additional events, culminating in the ever-hyped International taking place over summer. 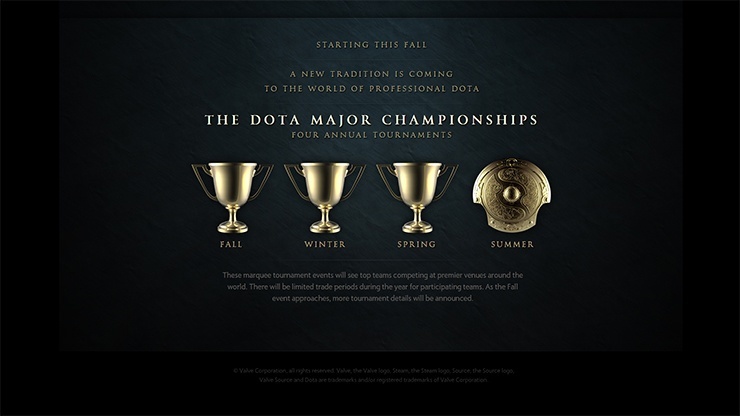 Each Major, whilst tied directly to The International, is hosted by a third-party organizer at various locations across the world.  While there are some small differences in formats, each Major follows the same general approach that The International also uses.

Regional Open Qualifiers:  eight regional single-elimination brackets (two for each region), with the winners advancing on to the Main Qualifier.  Amateur, unheard-of teams have their chance at fame.

The regional Main Qualifiers: consisting of a series of small group stages, the winners of which fight against each other in a double-elimination playoff.  The winner and runner-up of each region’s playoff then earns their ticket to the LAN event itself.

The Group Stage marks the true beginning of the live tournament, with all qualifying teams split into small groups that play sets of 3.  The top two teams in each group move forward to the main event’s upper bracket, while the bottom two teams start off on the main event’s lower bracket.  For The International 2016, the group stage has been removed.

The Main Event, then, is seeded based on the results of the group stage, with a double elimination format.  Teams starting out in the lower bracket are faced with a Bo1 match for the first round, while all other matches are Bo3 except the finals, which is a Bo5.

Along with the introduction of these Majors, Valve stipulated new rules concerning roster changes, a reaction against the huge amount of team-hopping that was previously happening amongst teams.  Particularly amongst top-tier teams, it seemed like the best players were constantly being shuffled into different configurations, a stark reminder of the importance of team chemistry and harmony in Dota (and how much harder that is to achieve than merely having 5 world-class players on a team together).

The rules require that a team’s roster is “locked” before a new Majors season starts each winter, and making any changes to that roster leads to that team losing its direct invite (forcing them to go through the long and uncertain open qualifier stage).  This doesn’t completely remove the possibility of roster changes though; it just means the risk of not qualifying needs to be factored into the potential further distance the team might go in the main event itself.  PPD, captain of Evil Geniuses, recently made this call in bringing zai and UNiVeRsE back to the team mid-season, and as a roster with a proven record of being world-class, hedged their bets on being able to blitz through the open qualifiers with ease.  The bet paid off, and they went on into the main qualifiers stronger than they would otherwise be.

Prizepools for these events are, by far, the largest available from e-sports today.  The yearly International format being broken up into smaller events with smaller prizepools was met with even more money being pumped into Dota, and has led to utterly obscene amounts of money being awarded across each year. Whereas, previously, everything would rest on being successful at The International, teams now have regular shots at making the big bucks throughout the year. 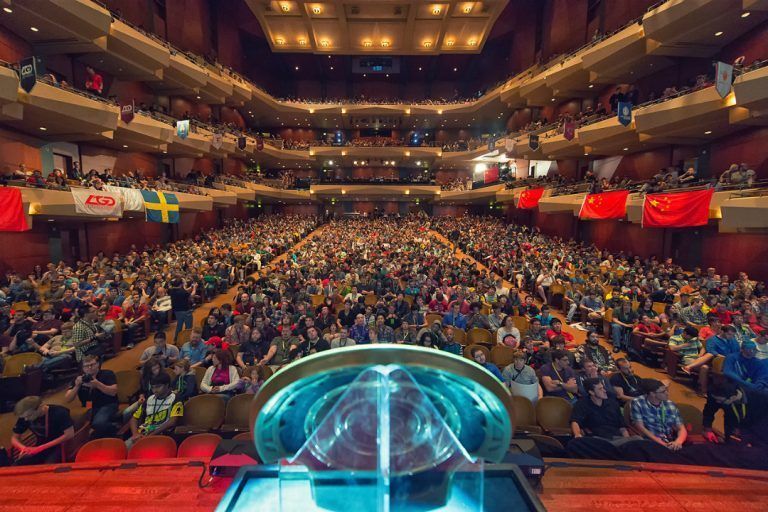 For example, the prize for 1st place at the last Major surpassed $1 million by itself (more than the 1st place prize for the first two Internationals).  Certainly enough money to keep food on the table for those teams skilled enough to place highly on a regular basis.  The 2015 International saw nearly $7 million go to the winning team (and still boasts the largest total prizepool in e-sports history, completely dwarfing anything from any other game).   To put in perspective, League of Legends – probably the most popular e-sports currently in existence, has yet to see a 1st place prize of over $1 million (and tends to give out far more diminished prizes for runner-up positions).

If you’re new to Dota, tuning in to watch a game may end up being an exercise in frustration.  The commentators have been Dota players for many years, and in order to provide high-level analysis they have to assume their viewership knows the basics. 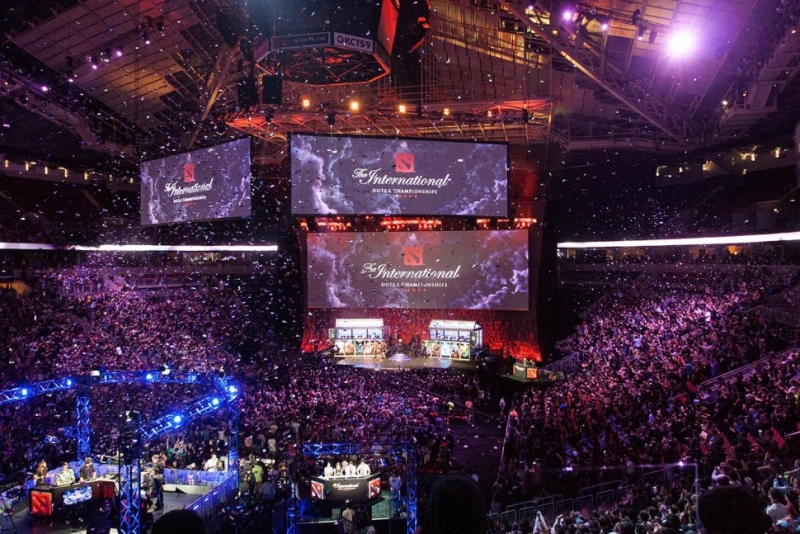 However, since 2014 there has always been a separate stream called the Newcomer’s Broadcast, which streams the same games at the same times, just with different commentators that aim to explain the fundamentals as the action unfolds.  Highly recommended if the main stream mostly goes over your head:  What better way to learn the game than betting some spare change and being taught the mechanics while cheering for your horse?

There’s also the option of watching The International games from within the Dota client itself.  This allows you complete control over the camera and various info panels.  It’s also free (unlike other Dota tournaments which often require the purchase of a ticket to watch in-game).  If you really want to study particular players, this is by far the best way to do it.  Oh, and you can still stream caster audio in the game itself (choosing between any of the available casters), so you won’t miss out on the hype!

The more money there is on the line, the more you can expect teams to bring their A-game: with the Valve-sponsored events drawing the largest prizepools in all of e-sports, everyone wants to be playing at their absolute best.  After all, there are very few professional Dota players that make it far without being able to stay calm under such pressure; many players report feeling even more fired up and focused in these conditions.  Upsets are still a possibility, especially in the form of regional differences bringing unseen strategies to the table that catch teams off-guard.  But, going back through all the Internationals and Majors so far, the most common outcome is that the strongest team wins.  When it comes to the finals, no team is going to win a best of 5 off the back of a cheesy strategy.

There are times when a relatively weak team goes much further than anticipated off of a particularly strong strategy, however.   A perfect example of this took place in The International 2014, during a time of a particularly unloved metagame involving what was known as the ‘wrecking ball’:  incredibly early-game 5-man pushes that led to snowball victories that the defending team had no chance of stopping.  Both teams in the finals (Newbee and Vici Gaming) had steamrolled their way there off the back of the same strat, but it quickly turned out Newbee were just better at it, despite the betting odds at the time suggesting a relatively even finals. 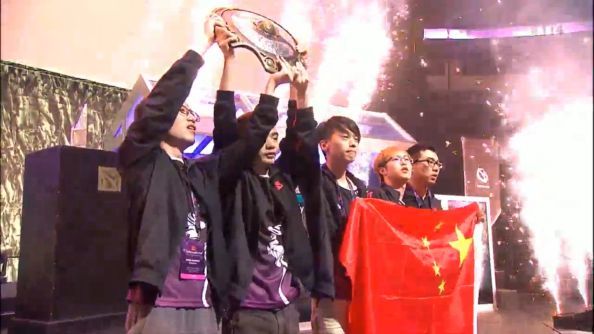 What transpired was a miserable set of games in which Vici, after losing a game, would simply try again with the same strategy in the next.  It seemed like they had no alternative gameplan to the one that got them so far, and upon coming up against a team that did it better, they simply crumbled.
The lesson for betting?  Know which teams have gone the distance due to their fundamentals, and which are simply riding off the back of an overpowered strategy, and are about to have their bubble burst by a superior team.  Again, the best way to do this is to keep a finger on the pulse of the tournament:  Watch as many games as possible!  Only by doing so will you understand the story of the tournament thus-far, and be able to predict the rise and fall of teams and their playstyles.