Ever wondered which of the immersive esports title is the most popular amongst fans? Which of the MOBA and FPS games are racking up the viewer numbers and securing the bets? It might be difficult to finalise the answer to these questions, however with a little help from a recent Esports Charts post, we are able to gather a deeper insight into the likelihood of which games are being plucked as first choice and which, in comparison, are falling by the wayside.

Esports Charts (ESC) is a statistical platform that collects analytical data across all esports streaming services, such as the ever-popular Twitch platform. It works by pulling in live data from across multiple sites and categorising that information into useful facts, such as the competitive prize pools, hours watched and the event-dates for your calendar. Their most recent post created has allowed for viewers to compare the popularity of the games as ESC works by tallying them up and converting them into a more accessible, informative chart. 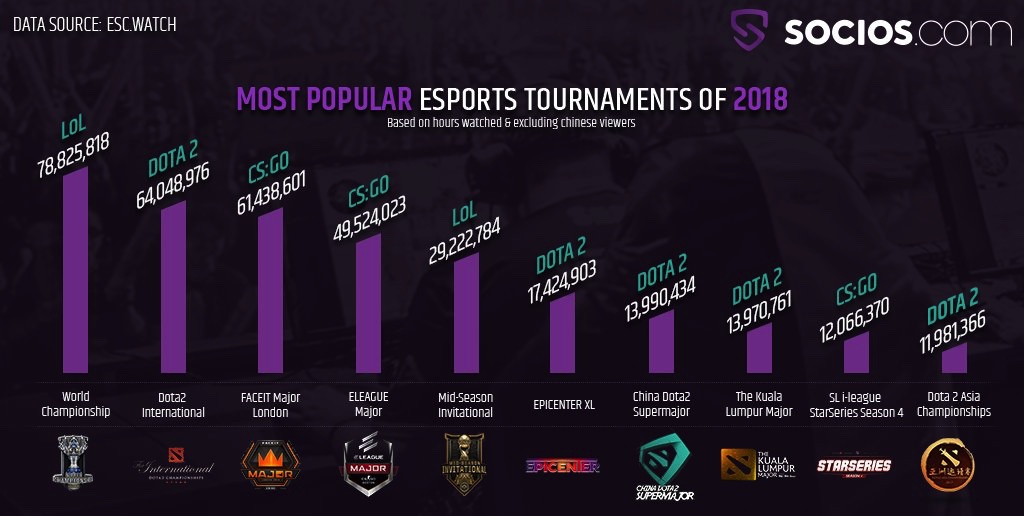 On initial viewing of this chart, it could be confusing to some as there are multiple mentions of various esports titles, however the tournament type and event information is carried underneath. According to this specific chart the League of Legends (LoL) World Championship Series 2018 holds the record for the most watched tournament of last year, with almost 79 million hours worth of watching from fans tuning in to support the team players and see them gain victory or fall with defeat. These figures are excluding the Chinese fanbase but still a staggering figure to compete with and one that put this game in the lead by a 14 million hour margin. So why was this event so enticing?!

The sheer volume of interaction that is incorporated into the World Championship Series is phenomenal. Twenty-four international teams competing, stage-by-stage eliminations and the incorporation of regional players and fans from various corners of the world is just some of its charm. Year by year the betting odds increase and the viewing statistics soar with the Final round being recorded as reaching over 200 million consistent spectators last year, labelling it to be the most watched event in esports history. Fans of League of Legends tune into this remarkable event every year to witness the very best of the best compete for the glorified trophy and winning title.

The other two titles fighting for top positions place in terms of viewing heights, is the Dota 2 International Championship and Counterstrike: Global Offensive (CS:GO) FACEIT Major London Tournament; both of these events are extremely well managed and favourites of the esport community. The appeal behind CS: GO could partially be that it is the most successful first-person shooter game of its kind, unlike the traditional battle arena mode that you find in Dota and LoL. The FACEIT Major Championship is similarly broken down by separate formats to distinguish the stronger of the teams to progress to the final stages. Qualifiers, Minors and Challenges are all individually fought for and fans can place bets, engage and witness these trails before the inevitable deciding final.

The Dota 2 International follows a similar pattern, however what’s alarmingly attractive is the prize pool that Dota players aim for. $25 million dollars being the record-holding award for the team worthy enough to pass through each of the stages and take the title. The locations of the Dota 2 International are a little more unique than those of other gaming championships, which could be more appealing to certain audiences; urban US cities such as Seattle or Canadian staples such as Vancouver have both been on the prospectus for the title, where as League of Legends has traditionally focussed its tournaments mainly on capital cities across the world.

To establish a solid favourite esports title is too much of a momentous task, even with the help of Esports Charts laying it on the line. Each have pro’s that add to the appeal and others have unique points that differentiate them from their opponents. Battle-arena style games may seem to tip the scale currently with the above chart pointing in their favour for viewers to tune into, but apparently not by much which leaves the competition very much open to all of these virtual games.

The world of esports is constantly changing and growing year by year and the prospect of these results being turned upside down and inside out isn’t completely unrealistic and fans of this new era have the power to make that happen.