PUBG Corporation has unveiled the PUBG Nations Cup which will take place in Seoul, South Korea at the Jangchung Arena on August 9-11. The tournament will see 16 teams go head-to-head for a $500,000 prize pool.

The 16 participating teams will be selected from the following five continents; North America, South America, Europe, Asia and Oceania.

Players from each country will be selected by their peers or through other country-specific methods. The selection process will produce four all-stars that will be part of a 16 team tournament across three days of competition, with each team playing a total of five matches a day. 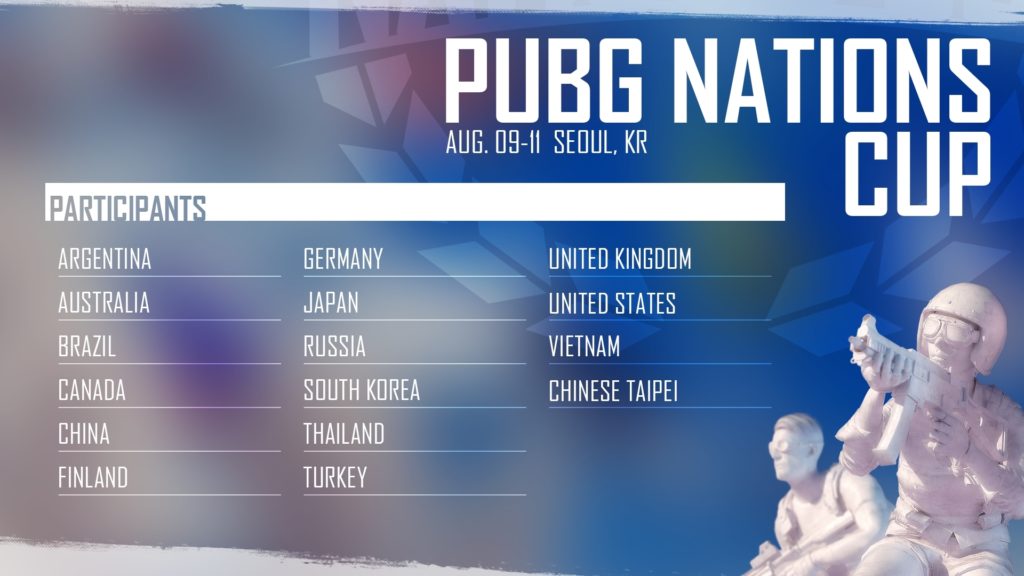 “Nations Cup, the first PUBG-hosted global esports event of the year, is the embodiment of international competition, which brings together the top players from around the world to represent their countries,” said, Jake Sin, Director of Central Esports for PUBG Corporation. “Nations Cup will close out an exciting summer of PUBG esports and we look forward to continuing that momentum throughout the rest of the year.”

PUBG Nations Cup marks the end of a packed summer of PUBG Esports. Both the GLL Grand Slam: PUBG Classic in Stockholm (July 19-21) and MET Asia Series: PUBG Classic in Bangkok (July 26-28) are set to take place in the weeks leading up to the event.

The Nations Cup takes place after the end of Phase 2 and before Phase 3 of the PUBG esports circuit, which begins in September. It will also be the final global esports event before the 2019 Global Championship in November.

The Global Championship will see 32 of the best teams from 11 regions compete in a country yet to be announced. An initial prize pool of $2 Million will be up for grabs, with an additional 25% of the sales from the PGC in-game item also being added.