As the Final of the second month of the MFAM Gauntlet starts tonight at 4PM EST, let’s take a look at the teams competing and the format

Last month it was “Team MFAM”, the gauntlet qualifier winners who took home the $24,000 prize for winning. A total of 420 points saw them defeat Vikkstar123, WarsZ and Jukeyz who came second with 400. To gain these points you are scored on kills and placement, lets dive further into how this works.

The format of the MFAM Gauntlet goes as such. There are two weeks of community qualifiers, the winner of these two tournaments get to play in the Main Event. The Main Event has teams of 4 enter, these then have 3 hours to score as many points as possible and create the highest total from their best 5 games. 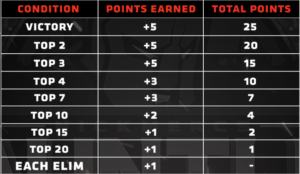 Competitors (subject to change up until event start time)

Personally, I’m backing Team Vikkstar to take the crown this month. Although they’re not favourites. Vikkstar currently holds the Warzone Squads kill world record, while he has won three back-to-back-to-back Warzone Wednesday’s with his teammate WarsZ. Joining them is Jukeyz, Syndicate Sunday winner who also got the most kills and a player who used to hold a kill world record. Their fourth is Marquez Valdes-Scantling, a wide receiver for the Green Bay Packers, he has some real Warzone skill too!

Last month’s highest total score was 420, with Vikk, WarsZ and Jukeyz coming in second place with 400. If they can up their game slightly from last month, they should be in the money. 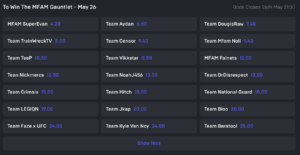 You can watch the MFAM Gauntlet on their Twitch Channel for an overview of the tournament with casters switching between POV’s. Or your favourite competitor should be streaming themselves. The leaderboard can be found here. Remember, it starts at 4PM EST and is scheduled to go on until 10PM, if you’re in the UK that’s 9PM – 3AM.